A sparkle of light glimmered beside a deep blue coastline, like a diamond set in a sapphire sea.  It was a still photo, but the light appeared to move, to radiate.

The tiny jewel was The Shores in a satellite photo taken on a December night of the island from space. The newspapers had dubbed the shot: “Star in the East.”

It was that time of year again, and, in The Shores, everything that didn’t have the legs or sense to get away was strung with lights. Thousands and thousands of Christmas lights.  More every year. The Shores was just catching up.  Electricity hadn’t arrived until the 1960s.  When it came, the villagers lost all their traditional restraint.

One year The Shores had so many lights, it caused a province-wide power failure, plunging the whole island into darkness on Christmas Eve. Except The Shores.  The villagers were used to power failures.  Those who had generators fired them up and plugged in the lights again.  An official limit had since been set on how many they could have, but they ignored it.

There were Santas and reindeers and elves. Christmas angels and stars.  The holy family -- complete with creche and wise men  – on roofs, on the ground, on mailboxes and well houses, in empty lots and on boats parked on land for the off-season.  The Hall at the centre of the village blazed with lights sparkling on a massive spruce at the front of the building, and Santa and his sleigh and reindeer rode the green steel roof.  Some houses dripped lights like falling snow; others had clumps tossed up on their roofs, shining drifts of lights.  There was hardly a tree or plant of any kind – lilac, maple, dogwood, anything that had branches, that was without decoration.  The Shores glistened in the night, from everywhere within plugging distance of an electric cord. Extensions snaked around the village, straining every household’s fuse box.  Breakers hadn’t reached The Shores yet.

The villagers’ Christmas spirit had created the twinkling diamond seen from space.  From the first of December until New Years, The Shores lit up the Red Island sky at night – and became that tiny spark of light in the satellite photo, announcing the existence of this tiny village to the universe.

Apart from Ian Simmons’ place, and he was from away, there was only one house in the village that wasn’t lit up.  It had been dark for years.  That was about to change.  Wild Rose Cottage was about to be lived in -- and died -- in again.

Until then, the villagers were wishing for snow to complete the Christmas portrait.

They would regret it. 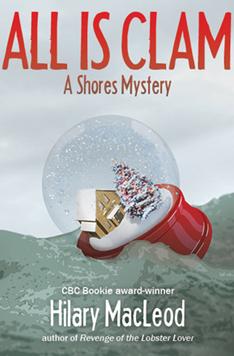 It's Christmas at The Shores. There's no snow yet, but there are so many outdoor lights that the tiny coastal village can be seen from space.

Apart from Ian Simmons' place, and he was considered odd, there was only one house in the village that wasn't lit up. It had been dark for years. That was about to change. Wild Rose Cottage was about to come to life, and death, once again.

Meanwhile, the villagers wished for snow to complete the Christmas portrait. When it came, they would regret it. With the snow comes a body.

​Mountie Jane Jamieson has seen murder here before, but none where she'd rather not catch the killer.  Jamieson does a lot of questioning, but no one's talking, all protecting each other.