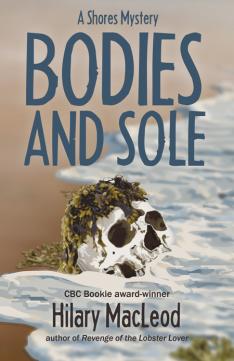 Where to Buy IT:

The Shores is celebrating a killer 200th anniversary. A skull tossed up on the beach sparks a heritage murder investigation.

Meanwhile, serial widow Vera Gloom moves into the village with her three ex- husbands. Are they one big happy family? Amateur sleuth, Hy McAllister has her doubts, and things get even more interesting when Vera starts working on husband number four. Hy has to convince Mountie Jane Jamieson that these people are more than just a little dysfunctional-- before it’s too late.

​     The skull washed up and slipped behind a big rock.

She had not tripped on it, thrown up on it, nor been knocked down by it.

She hadn’t even seen it.

Hy McAllister was taking her usual morning run on the shore, where, a few years before, she had stumbled, literally, across a corpse.

Since then she’d had other close encounters with dead bodies, on and off the beach.

She planted wet sneaker prints in the stretch of packed sand above the surf. She splashed through the run, the outlet of water from the pond that had served up a bloated cadaver a few years back. Undisturbed, the run carved across the sand, mixed fresh with salt water, then hitchhiked to Europe on the Gulf Stream.

The sea stone rose behind her twenty feet off shore.  It was the signature of The Shores, the landmark that told people they were here.  Once a part of the cape, the chunk had been carved away by the wind and the waves.  Each year it got smaller and changed shape.  This winter’s storms had sculpted it into the head of a man, staring upward in agony.  A black man whose white hair had been formed by cormorant feces.  The rock appeared to be screaming at the cape to which it had once been attached. The new look formed by the fierce winter gave Hy the creeps.

Her red curls bobbed on the morning air as she headed for the far cape.  At low tide, she could have rounded it and continued onto the next stretch of shore, known as Mack’s shore, and then on to the next and the next and the next, for miles.  The capes jutted out toward the water and divided beach from beach.  At high or incoming tide, it was still possible to get around them, but only by wading through water.

The tide was coming in fast.  Behind her, the waves played with the skull like a soccer ball, picking it up and leaving it a bit farther up the sand each time.  Then stopped.  It lay, exposed on the stretch of sand, grimacing.  There was no one to see.

Just as she was about to turn, a flock of gulls swooped down and began pecking and squealing and fighting.  Finding nothing of interest, nothing to eat, they soon gave up, in a disruption of wing flapping that tossed the skull about. A series of strong waves crashed up onto the sands, took it up, and deposited it in a nest of rocks, out of sight.

That was when Hy turned back.

It would be up to someone not yet at The Shores to find it for her.  Someone she didn’t know, but who was already on her mind.