The cold blade of the axe sliced through the air.
The skull cracked.  Human blood splattered on the fox’s lips.  She licked them and the taste flooded her small brain.
She was witness to a brutal murder, but she would never testify in court.  Not just because she was a fox, but because she was confused, blood lust singing through her.  She couldn’t say what happened when.  The humans. The axe. The brains, spilling on the sand.  Had she seen the killer?  Could she point to him…her?
No.  She couldn’t smell the difference between humans, except whether they were male or female.  There had been both. She sniffed the air.  As long as the creature was dead, what harm in tasting? For a long time, she didn’t move while she debated.
She shrank back when the human came down onto the sand where the blood was.  Had the person been there before?  Before the blood?  She couldn’t remember anything before the blood.
An unreliable witness, your honour.
She crouched in the deep shadow, eyes fixed on the axe.  She’d seen it kill.
The human went back up the cape. The fox relaxed, then froze at the scent of another one on the breeze, squatting down over the body.
Grooming?  Or preparing to eat?  Did humans eat each other?  The vixen wasn’t sure.
The human left.  The fox pulled herself erect, and then hunched down again.
Another one.
She slipped into the night.  Too many of them.  Too much trouble for blood gone cold and stale.  A dead man’s blood.
But he wasn’t dead, not quite.  As his blood spilled out on the sand, so did his spirit. His mind was fluid, his essence flowing out of his body, dissolving. He was torn —trying to get out of the body, trying to get back in—until death gripped him, sudden and hard.  With a jolt that tore him out of himself, Lance Lord was no more.

The fox took one regretful look back, her eyes glinting in the moonlight, fixed on a mist swirling over the lifeless form, trailing up the cape.  She closed her eyes, shook her head and looked again.  A living thing?  No.  It was nothing.
The lingering scent of blood galvanized her, and she pounced on a mouse, stupid enough to dart in front of her.  Soon she was carrying the small carcass to her den.
Behind her, the wind stirred across the surface of the water.  The waves stilled with the turning of the tide.  Just a few feet away, stripped of its soul, all its blood pulsed into a blackening pool beneath a shattered skull, Lance Lord’s body lay undisturbed all night.
Until Hy McAllister tripped over it.

"Like any good mystery, it twists and turns
until almost the last page. Judged strictly as
a mystery, it is quite a good one. And for
people who like this kind of mystery, this is
the kind they like, to paraphrase Abraham Lincoln."
​             - Chronicle Herald Review: Oct. 30, 11

At your local bookstore!

Nothing happens at The Shores. Ceilidhs, yes. Killings, no. Until one night, murder comes to the isolated Prince Edward Island village. Amateur sleuth Hy McAllister trips over a body on the beach. It's cottager Lance Lord, dressed like Jimi Hendrix, his head split open by an axe. As Hurricane Angus moves up the coast, Mountie Jane Jamieson and Hy vie to figure out who killed who and why, but they’re crippled by the hurricane, a power failure, and, finally, a dense fog. The Shores is sheltering a murderer. A murderer whose motive is possessive love, whose mind is the weapon, and who will kill again -- until Hy turns the weapon on the killer. 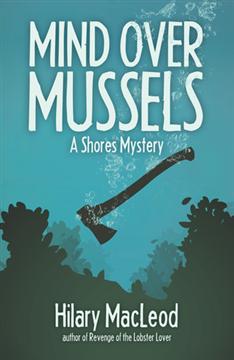