A lobster claw was tapping on the dead man’s teeth.

In a hand turned blue, the corpse gripped the handle of the lobster stunner that had killed him.  The plastic inlay had melted into his flesh, creating a strange exoskeleton in the shape of a lobster claw, with the texture of a partly-skinned mushroom, speckled with decay.  The rest of it, a long steel rod like an oversized curling iron, lay on the ground, tossed aside by the powerful current that had coursed through him.

Executed.  The implement was designed to kill the creatures in the pond humanely; instead, it had turned on him.  He lay partially submerged in the water, an oversized ingredient in a surf and turf supper, eyes staring unseeing at the ceiling with a look of surprise – or shock.

A burnt smell like overdone pork chops rose from his body.

One lobster had survived the electric jolt that had traveled through the man and her fellow
crustaceans.  She butted up against her dead pond mates, clambered up the rocks, and, unable to see, felt her way onto the corpse’s chest.  Propelling slowly forward on eight of her ten legs, she delicately tasted as she went.  With the other two, she began to claw at his eyes, as sightless as her own, antennae circling the air, smelling this potential new food source.  Then her attention turned to his mouth, slack and petulant in death.  There was something in there that interested her.

The click, click, click became a crunch.  The creature had found what she was looking for – a morsel of salmon wedged and rotting under a porcelain dental crown.

Crack.
The lobster’s big claw, the crusher, broke the spike of decayed tooth holding the crown.  With the smaller, the pincher, she threw it off.

At your local bookstore!
Chapters
Amazon 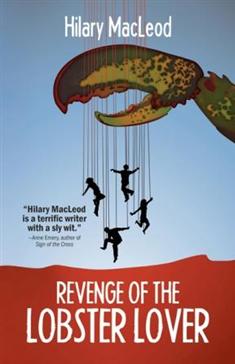 “Once Revenge of the Lobster Lover
gets its claws into you, you won’t put
it down. And why would you want to?
This novel is fullof colourful characters,
creepy crustaceans and complex criminality.
It’s suspenseful, yet often laugh-out-loud
funny. This is not your Anne of ​Green
Gables PEI.”

It's lobster season at The Shores, a fishing village isolated from The Island in a storm surge. Parker, a collector of antiquities, has moved there with his partner Guillaume, a chef just out of rehab. "Hy" McAllister, a website writer looking for lobster recipes for a client's newsletter, also needs a speaker for her Women's Institute meeting. Enter Camilla, founder of the Lobster Liberation Legion, spouting crustacean right-to-life rhetoric. The legion starts freeing lobsters from their traps, angering the villagers and the man who runs Parker's fisheries empire. In the tragic events that follow, the hidden connection between Parker, Guillaume and Camilla reveals itself.

Revenge of the lobster lover