Actually, it was raining fish.

Gus Mack was preparing a “lunch” before bed, while talking to her husband Abel. She stuck her head through the pantry door when he didn’t reply.  He wasn’t in the kitchen, the room they lived in, with the couch, the two rocker recliners and the stove.  There was an empty teacup where Abel had been seated.

Gus picked it up and continued her pursuit.

“You ain’t gone out are you?”  She called in the direction of the back door. “Not in this.”

Where could he have gone in this weather?    Red Island lawns were getting a much-needed soaking.  There had been no rain all
spring. The dry weather had turned the grass brittle, crusty.  The red clay was pink and cracked.

She shuffled over to the back porch, empty cup in hand.  She opened the door with her elbow.

A herring plopped into her cup.  She jumped back.  Dropped the cup. It smashed on the concrete stoop.  The herring slid free, and flipped like a slinky down the three concrete steps.  Plop, plop, plop, a streak of slime on each step.  The slippery fish skin glistened under the glow of the outside light.

Her eyes now accustomed to the dark, Gus squinted into the night.  A hard rain and a herring.  More than one of them, falling from the sky.  Gus was not a Catholic, but she crossed herself.

Herrings are falling from the sky over The Shores – an unusual phenomenon anywhere, but especially so in this case. A newcomer, Anton Paradis, has set up a restaurant that specializes in dangerous dining, cooking up food that can kill to tantalize the palates of wealthy clients. It’s a recipe for death. Someone’s bound to get hurt.
​

Someone does. Oddly, the victim dies laughing. By accident or design?

Mountie Jane Jamieson’s suspects it’s no accident. But could there really be another murder at The Shores?
​

All the while, a wind turbine slices its blades over the cape, menacing the villagers with its eerie presence. Death is in the wind as well as on the dinner plate.

Where to Buy IT: 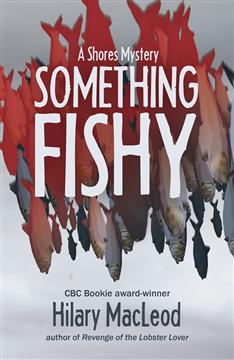